Forgot your Password?
The Redentore Day
vctour
Did you know that? History & Traditions Events

The Redentore Day is one of the few Venice holidays that Venetians really feel as their own. It is celebrated on the third Sunday of July. During the Saturday evening and Sunday , the areas of Giudecca island, San Marco Basin and Zattere became a playground of lights, colors, music, audacity, good food, laughter and lightheartedness. The Redentore Day is celebrated to commemorate the city’s liberation from the plague of 1575-1577 and the later construction of the Redentore Church by order of the Venetian Senate (September 4, 1546) as a votive offering.

The plague killed more than a third of Venice population in just two years, so the Venetians care to celebrate this so loved day. At the end of the plague, in July 1577 it was decided to have a big party every year to celebrate the liberation of the city, a votive bridge was then set up linking Venice with the Redentore Church to the Giudecca island, so devotees could go to pay homage. 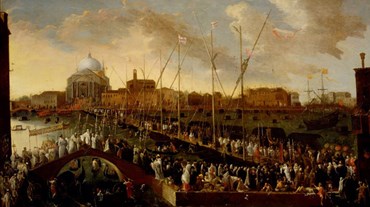 Still now, the Saturday before the third Sunday of July, on the Giudecca Canal is prepared a long pontoon bridge made which connects the island with the Zattere to the Church of the Holy Spirit, so that devotees can get by foot to Redentore Church. After nearly five centuries this festival is still alive and rooted in the culture of the Venetian people.

Today the festival is opened by the Venice Patriarch with his blessing, on the Redentore Church staircase, while the crowd began the procession to the Giudecca island. At 7.30 p.m. the first Eucharist celebration, followed by the one of  0.30 p.m. and the Sunday morning at 8.00 a.m.

The Redentore Day  attracts many tourists and Venetians for a great fireworks show that takes place in the night between Saturday and Sunday in the beautiful setting of St. Mark’s Basin where a sea made of ​​boats and boats lining the lagoon in front of St. Mark’s Basilica. Moreover, the day after the city 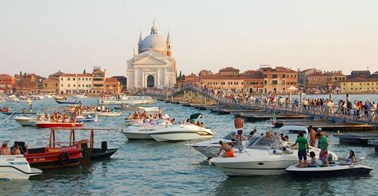 of Venice is in celebration also for the three races of typical Venetian boats thus attracting a wide audience from around the world. The Redentore Day  is a religious and popular feast  that mixes sacred and profane.

It is the most beloved party by the Venetians who still live the night of the famous fireworks almost like a liberating appointment recalling that far 1577. Redentore night is a special night, full of joy, colored lights are reflected in the water, the atmosphere is cheerful and bubbly, souls are lively and festive, fears and worries disappear.

Since Saturday morning people begin to prepare the boats and cooking the Redentore dinner  for all the friends and families. There is someone who cook for the whole group of people, those seeking the best  side in the Saint Mark’s Basin for the boat and who adorns the boat or the terrace from where you will be watching with friends the fireworks show.

Towards midnight, the fireworks show starts, in one of the most beautiful stage 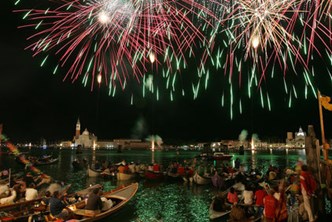 in the world. There is no other place on Earth where the fire lights may light with its multicolored colors like San Mark Basin where all the Venice wonders are reflected: Palazzo Ducale, San Giorgio church and the Columns of Mar

The Redentore Night is a unique and special evening, which mixes sacred and profane, where you can fill your eyes and the spirit of wonder and unique emotions. An evening with the snub nose, to experience the magic and tradition of the most beloved party by the Venetians.