Forgot your Password?
Venice Quarters: i Sestieri
vctour
History & Traditions
One of the many peculiarities of Venice is the way the city is structured. The city is divided into 6 areas called Sestieri (from latin word “sex” = six). The house numbers refer to the local Sestiere and not to the street, so a typical Venetian address will be Cannaregio 3210 or Dorsoduro 2541. This system is very old, probably it was estabilished in 1169 for  taxation puroposes.


Castello
It once was one of the main islands on which Venice was built. Its name, meaning Castle, comes from a defensive castle that was built anciently in the area. It is the area where the Biennale takes place.

San Marco (St.Mark)
Anciently known as Morso (lit.Bite), because its ground was the hardest in town or Brolo (in Venetian small orchard) because it was full of trees.  When the body of St.Mark was brought in the city from Alexandria and the Basilica was established the whole area took the name of St.Mark (from the square surrounding the Basilica). 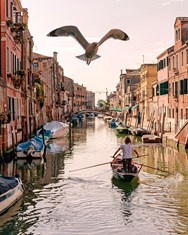 Coming from Canal Regio (Royal Canal) as the Grand Canal in this area is very wide or more probably from the groves of reeds (canneti in Italian) present in the area. It is the area going from Rialto to the Railway Station.

Dorsoduro
It litterally means hardback and it is so called because its soil was hard (duro in Italian) and the island has the shape of a back (dorso in Italian). It is the area of the curch of Santa Maria della Salute and the Accademia Galleries.


S. Polo
Coming from the church of St.Paul (in Venetian San Polo) built in 837. It is the smallest Sestiere in Venice. It is the Frari area.


Santa Croce
Coming from the name of Santa Croce (holy Cross) church built by the inhabitants fleeding from the Longobard Invasion. It is the area of Venice harbour and docks.
venice History Traditions
Categories