Forgot your Password?
Venice and the Age of the Carnival myth
Tommaso
Carnival

In the 18th century, in Venice, noblemen no longer wear their togas of office, the women have asses black from all the pinches they get: there is enough joking and luxury you can’t image: religion is going down the drain’ Angelo Labia poet, priest and member of a Patrician family lamented in a journal of this period.

Labia’s Venice was a very strange place indeed; its peculiar type of decadence had no contemporary equivalents, and it is highly unlikely that anything remotely similar to it will appear again. By any commonly accepted standards, eighteenth 18th century Venice was a society gone mad.

It was called ‘the city of masks’ Carnival lasted for six months, and people wore masks the entire time.

The gambling that went on day and night was described by the Great Council as ‘solemn, continuous, universal, violent’. Nuns wearing pearls and low-cut gowns fought among themselves for the honor of serving as mistress to a visiting papal nuncio.

Ladies carried daggers and pistols for the management of their love affairs – which they preferred to be quick and without deep emotional involvement- and it was considered a disgrace for a married woman not to have a Cicisbeo, or combination lover and gentleman in waiting.

A Civilization in Decadence

By 1750, the city’s rich were very, very rich – and her poor very, very poor. Some patrician families had fortunes that amounted to hundreds of millions of dollars, lived in fifty-room palaces staffed with as many servants, owned as many as twelve gondolas, and maintained equally magnificent premises and appurtenances on the mainland.

Venetians looked as if they had never suffered a defeat in their entire history as if their empire was not only intact but destined to last forever. Most Venetian Nobles acted as if Venice still ruled the entire Mediterranean Sea. 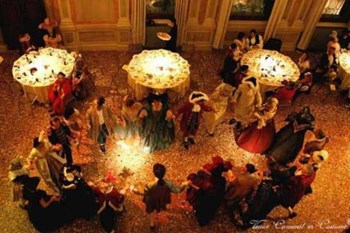 The 18th century for Venice was a mostly peaceful century. With no wars no fights, with the lower and middle classes doing all the hard work, and with diminished political responsibilities, the Venetian Nobleman was free – within the limits of his purse- to dedicate himself to “his pleasures”. The range of those pleasures was wide, for the 18th century Venice was a totally permissive society in which any behavior was condoned, as long as it was executed with style.

The number of families that could lead a life of pleasure probably numbered four hundred and each family had several members.

Live starting from € 300 the experience of Minuetto, a great Carnival Ball at Dandolo Palace where everything began with Casanova, click here!