Forgot your Password?
Venice Carnival during the 1700
Tommaso
Carnival

The official passport to the Venice Carnival was the Domino, a bizarre costume that combined the mask Bauta, a hood of velvet silk  and a three-cornered hat. 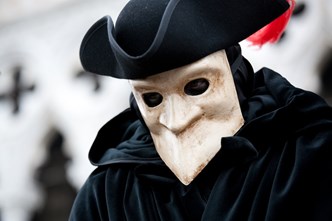 The Domino did hide all signs of class and swept away all barriers. With the mask in place, one could do or say as one pleased. Priest in Dominoes could conduct love affairs with impunity; working girls could sit next to patrician women at the gambling table.
The Venetians were permitted to wear their Dominoes six months of the year from October to Lent. During the six months Carnival, many nobles removed their mask only to go to bed. Commoners frequently did the same, and during Carnival the two classes mixed as equals. It was the mask that finally brought democracy to Venice.
The most typical mask of The Domino is the Bauta, the most typical mask of 18th century Venice. It appears in the city between the 15th and 16th centuries and is the only one that could be used freely all year round, not only at Carnival. They were made by the "Mascareri", the masks craftsmen, initially black, then white and covered 3/4 of the face leaving the chin slightly visible. The final part was pitched so as to allow someone to drink and eat without having to remove it, it also served as a soundboard that altered the voice.
Create your Carnival mask in a "Mascarero" atelier with € 54,  click here!
Ridotto, the Gambling House

One place where nobles and plebeians mixed freely together was the imposing structure known as the Ridotto, a gambling house that was located near the florid baroque church of St. Moisè, not far from Piazza San Marco.
A veritable temple of chance in an age that worshipped money, the Ridotto’s luxurious red and gold rooms were hung with stamped leather and illuminated by finest crystal chandeliers from Murano. In their stultifying idleness, Venetian noblemen carried gambling to inordinate extremes: they hazarded their clothes, their landed estates, even their wives – any one of which might find its way into the lap of a masked commoner.

Many great patrician families were ruined by gambling, and many commoners were vastly enriched. So serious a problem did did gambling become that the Venetian Authority closed the Ridotto in 1774. Gambling did cease, however, it simply went underground. 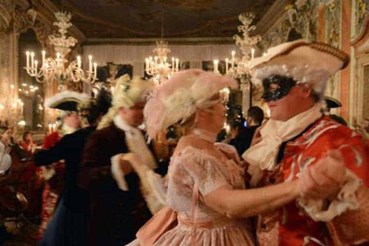 After gambling, extramarital sex was the most favored pastime of the 1700 Venetian Carnivals. For centuries Venetian women had a straitlaced, secluded home life, while the  men restricted their sexual activities to their wives and their house servants.

Then during seventeenth century, standards of sexual morals began to relax and the sexual market was wide open. It has been said that in 1700 Venice all women were courtesans during the Carnival. Absolute freedom reigned in the sexual sphere during the Carnival, and Venetian women made the most of it.

Would you like to dance in a historical Palace dressed like an ancient Venetian noble?
Discover starting from € 300 Minuetto , one of the most elegant Carnival Balls in Venice at Dandolo Palace, in the majestic historical hall of the Ridotto, click here!

The key figures in the liberation of the Venetian woman, mainly during six-months Carnival, were her tolerant husband and her Cicisbeo, or recognized companion.  After the first year of marriage, a patrician woman was free to choose her Cicisbeo with the full content of her husband.

He had to be her social equal and attended his lady constantly, kissing her hand every time he met her, constantly accompanying her to the Carnival parties dancing Minuetto. He helped her into her gondola, called her servants for her, occasionally he made love to her.


The Casino, a nest of pleasure 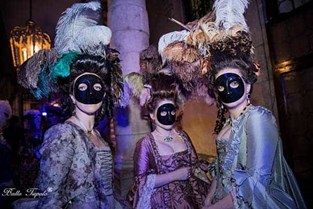 The Casino was a small love nest, usually decorated with Murano mirrors and frescoes, that the Patricians maintained for the entertainment of his amours, after the Carnival balls. The nobleman would take his love to his Casino in a covered Gondola.

Reserve with € 550 your Ballo Tiepolo tickets and live a magical night, click here!
What to do during the Carnival History
Categories