Forgot your Password?
Venice Carnival Mask: a brief history
Filippo Merlo
History & Traditions Events Carnival Art
In a city where there seems to be a mask shop on every corner, it may be surprising to learn that the ancient Venetian craft of mask making was only revived about forty years ago.

Masks disappeared, along with Carnival, when Napoleon’s troops brought an end to the Venetian Republic in 1797.  However, masks comeback in the late 1970s and early 1980s when a group of young people brought them once again in Venice.


The Origins of Mask making in Venice

Mask making in Venice can be documented back to the 13th century, though it probably existed much earlier. On 1436, the ancient profession of mascareri was founded under the jurisdiction of the Painter’s Guild. Over the years, masks were used for a variety of reasons — in the government, the theater, and as a means of disguise. Masks provided the Venetians a degree of anonymity.


The Social Vale of the Venetian Mask 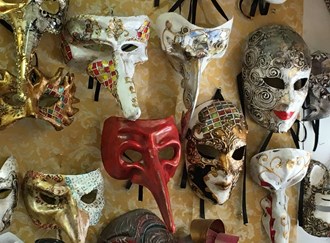 The wearing of a mask put everyone on the same level: rich and poor, nobleman and citizen, beautiful and ordinary, old and young. It permitted confidences to be exchanged anonymously — everything from accusations before State Inquisitors, to a potpourri of sexual indiscretions.

Prostitutes practiced their trade without fear of retribution; homosexuals hid their illicit lifestyle. In 1458, it was decreed that men were forbidden to dress up as women and enter convents to commit indecent acts.

The Most Famous Venetian Masks

The most important Venetian mask the Bauta was worn by both men and women, and was not considered a costume but a form of dress — required wearing if a woman wanted to go to the theater. Also the famous mask “the Black Death Doctor” had a long beak-like nose stuffed with disinfectants, and, as its name implies, was used to protect doctors from the plague.

In the 18th century, the renowned Venetian playwright, Carlo Goldoni, brought theatrical masks to the forefront. Pantalone, Harlequin, Colombina, and Pulcinella were among the many masks that found their way into the Carnival; nowadays they really are the most common Venetian Mask that you can see on the main stage of St Mark’s Square.