The quintessential  Venetian libertine was Casanova, the son of a Venetian actor and a shoemaker’s daughter.  As he stated in his autobiography, “My Life and Adventures“. Casanova’s purpose was simply pleasure, and his greatest pleasure was sex, preferably with a new woman.

Like many libertines, Casanova also dabbled in magic and the occult, and this proved to be his undoing. Denunciations were issued from many quarters, his accusers calling him a “violater” and a “diabolist”. The police began to watch him, and he was arrested.

He was taken by barge in front of the court, after the trial he was escorted from the Doge Palace, over THE BRIDGE of SIGHS, to the prisons “PIOMBI”. For fifteen months Casanova remained in the PIOMBI, working the whole time on his escape. He escaped onto the sloping roof of the Doge Palace, slippery with night mists and he fled across St. Mark's Square to a Gondola in which he made his escape.

Visit the Doge's power seat and the mysterious prisons with € 50, click here!

A Lustful Man in a Lustful City 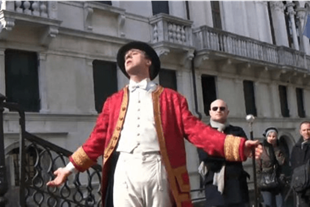 If we are to believe his memoirs, Casanova led the life of a libertine twelve months of the year;  the rest of the population had to be content with the six-month Carnival. During the Carnival, the city filled with wealthy tourists: wild young blades on allowance, middle-aged rakes, and aged roués trying to recapture their youth.
Discover Casanova Life with € 29, click here!

They descended on the lagoon with only 2 thoughts in their heads gambling and women. Noble ladies wearing black oval masks temporarily abandoned their husbands and cicisbei to make themselves available and to lecherous European lords,  whose favorite place of assignation was the covered Gondola.

Noblemen wearing white, backed masks preyed on tourists’ wives and lured wealthy visito into the Ridotto, where they gambled with “loans” from their guests.  The cafes, there were 2 hundred of them, and many were open all night long, became second homes for everyone during the Carnival.
Would you like to dance in a historical Palace dressed like an ancient Venetian noble?
Discover starting from € 300 Minuetto, one of the most elegant Carnival Balls in Venice at Dandolo Palace, in the majestic historical hall of the Ridotto, click here!

The Greatest Parties of the Century

Venetian nobles threw colossal parties for their most distinguished visitor. For example, the Pisani family – owner of a pleasure Villa on the Giudecca, a palace on the Grand Canal (Actually Palazzo Pisani Moretta), a vast residence at Stra in the mainland, as well as one hundred other residences in the Veneto Region,  spent a fortune for a party to entertain King Gustav III of Sweden. During one wild party in Palazzo Labia, the head of the Labia family hurled all his gold plate out of his windows and into the Canal.

History Things to do during the Carnival
Categories