Ca’ Vendramin is famous today for being Venice’s Casinò, and indeed the first casinò in the world. Until recently, it

only held the classic French gambling games dating back centuries, but one can find more modern American-style games now, with a whole room dedicated to Texas Hold’Em Poker.

Gambling aside, the building dates back to the 15th century, and it changed hands many times before the Richard Wagner rented twenty of its rooms in 1882; he would die here only a year later, happy to spend his last days in Venice in the company of his family and gondolier. The walls in many of the rooms still have the same drapes chosen by him as a tribute to his memory. 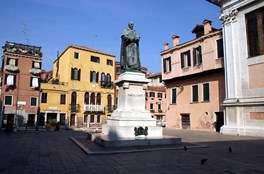 Here we are in Campo Santa Fosca, which seems more of a transitory spot but is actually rich in history, much of it rather violent.

At the centre stands Fra’ Paolo Sarpi, a Venetian friar and one of the great figures of the Republic history. In the 17th century, Venice’s empire had grown so powerful that it became increasingly independent from the Church’s dictates in Rome; and when the Pope then finally excommunicated the city of Venice, Sarpi, a staunch patriot, defended its liberty, fiercely condemning the Church’s intrusions in Venetian affairs. And so, on an October night in 1607, three hitmen sent by the Pope ambushed Sarpi here in this square and stabbed him three times. Fortunately, he survived, even if barely, and became a celebrity advocate of Venice’s independence and anti-Papal struggles.  Look to Ponte della Guerra, the Bridge of War; it might seem calm now but this is where fights regularly took place, with two teams meeting in the middle armed with pointed scalding sticks. Deaths were not uncommon, and in time weapons were banned and was moderated to just fist-fighting, much like another Venetian bridge, aptly called the Bridge of Fists.