Campo delle Beccarie, this is one of the many parts of the Rialto market, the economic force of the Venetian Republic, a little like one might think of Wall Street in New York today; it was the area where butchers came to collect, cut and sell their meat. “Bechèr” is in fact Venetian for butcher, and they would set up their stands here in the campo, next to the long building lined with marble columns which was the famous fish market, certainly bigger and busier than the theirs would have been. That said, the Gallinari, who held the monopoly on chicken meat in the 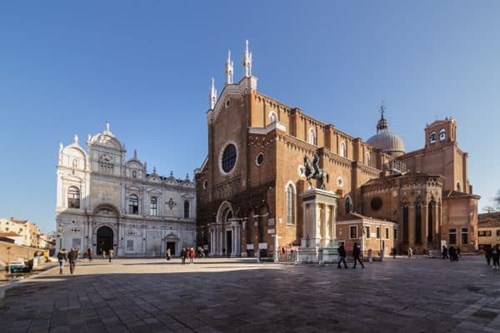 city, were highly respected and protected by the state as they provided crucial cheap nourishment to the lower classes, which in turn meant political stability. As everywhere in the Rialto, this place would have been very noisy, upbeat and chaotic, with the sound of haggling customers and sellers drowning out everything else.

Almost hidden by the market stalls and stands during the day, not everyone spots the Church of San Giovanni Elemosinario, St. John the Charitable, who dedicated his life to assisting the poor and abandoned. It was no mistake that this church was placed here in the middle of the market, where there were certainly many beggars in search of a kind handout.

The church quickly became a place of worship for the merchants working in the Rialto market, and those who could afford one, bought the rights to an altar where they would meet and pray for good business; to this day, inside you’ll find altars dedicated to the Gallinari, the chicken merchants, to the Biavaroli, the fodder merchants, and one to the Corrieri, the postal workers. A unique meeting place of the spiritual and material worlds.

The church of San Giacomo of Rialto (San Giacometto for the Venetians) is supposedly the oldest church in Venice, said to have been founded in the early 5th century, at the foundation of Venice itself. Among its many architectural curiosities, are a rare brick dome and a 15th century 24-hour clock on the façade. This whole Rialto area we are exploring is the market space of Venice, which is still active today. Campo San Giacometto here is where Venetian bankers, money-changers and insurance brokers would do their deals, probably including figures like Shakespeare’s Shylock from the Merchant of Venice. On the side opposite the church you’ll see a column encircled in a romboid-shaped fence; this is the Gobbo di Rialto, the kneeling Hunchback of Rialto supporting a pedistal on his head; and from here, in the past, a spokesman would stand to announce the new laws of the Republic. Also, people condemned of a crime would begin their painful procession from Piazza San Marco would end their capital punishment here among the jeering crowd.