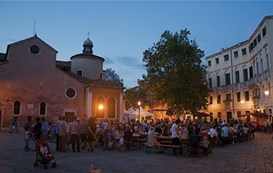 Enter in the serene atmosphere of Campo San Giacomo dell’Orio. The church is one of the most ancient in Venice

and one of most oriental too, with its Byzantine plump apses and warm colours looking out.  Among the rare treasures is a green marble pillar which came back from Constantinople during the 4th Crusade in 1204, when Venice essentially looted the Byzantine capital of all its most wonderful art. The façade, as with many older churches, looks towards the narrow canal and not the campo, where there is often a downbeat feel, with children playing football until sunset almost every day of the year. This is all the more entertaining if you notice a plaque on the church wall which forbids any ball game on pain of severe punishment; football has always been played in Venice and especially in this campo, where centuries ago noblemen in the area paid to have the muddy square paved with cobblestones, and who, ironically, were then the first to complain about the noisy boys and their ball-games. 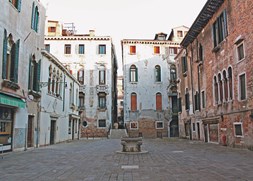 Campo Santa Maria Mater Domini is dedicated to the Holy Mary as many other Venetian campi.The campo is encircled by beautiful and elegant palaces; looking towards the small bridge the white palace on the right has a four-part window in typical Venetian gothic style, in a mix of Western and Oriental art. Under it is a relief of what looks like a four-leaf clover, that tells us it was home to a Compagnia delle Calze, literally a Brotherhood of Tights; these were groups of young men who simply enjoyed partying and dressing up in flashy fancy clothes, each brotherhood with specific colours and symbols to distinguish it from the rival ones. In the lower part of the relief is a Latin inscription which reads ‘Malo Mori Quam Fedari’: ‘I’d rather die than betray’, that tells us that even at the time fashion was clearly no trivial thing.