vctour
History & Traditions Did you know that? Art Self Guided Tours


Ernest Hemingway and his novella 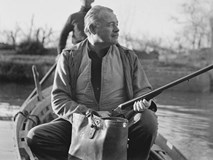 There is no doubt that the intensity of warfare in the Veneto district overall, and it echoes in Ernest Hemingway’s

novella Across the River and Into the Trees, published in 1950. Although not the greatest of Hemingway’s writings, there is nevertheless undeniable poignancy in its account of the survival of a beautiful city after war.

An American Colonel has led the allies to the area and returns to Venice in the last hours of his life. Looking over the water from afar, like so many before him, he praises the Torcello boys who first built the city. He identifies the campanile of Burano (recalling the island’s association with lace) , Murano (remembering its glass), and then Venice itself “Christ what a lovely town”.

Like most writing about Venice in the twentieth century, Across the river and Into the Trees is a visitor’s novel, although not a tourist’s novel. It is a tale of Death after visiting Venice, of Death occasined not by Venice, but by war injuries from allied service in the area.

The love affair between the Colonel and the young Contessa is told without sentimentality or undue indulgence, at the end of a military life. The obligatory lovers gondola ride is taken with a bucket of champagne and a rug in winter. The warming presence of a day to day Venice, a Venice of the “cold hard light of morning” and of acqua alta, is felt throughout.

There is a memorable visit to the Rialto Market “the closest thing to a good museum ….. to study the spread and high piled cheeses and sausages” and to buy supplies for the duck- shooting expedition on the lagoon. The Colonel soon gravitates to Harry’s Bar as the author so often did: Hemingway is the bar’s most famous visitor.

So frequently, Venice provokes recollection, both of its own past, and the past of its visitors. It releases the level of the oneiric, it hovers in the collective memory. As the city’s chic cocktail centre, Harry’s Bar was the meeting point for the post war influx of visitors, the place to be seen when crossing from the lido, or from the closer hotels.

It had opened modestly in May 1931 with one ground-floor room, four Windows and no view. From the 1960s an upstairs dining room looked over the Bacino to san Giorgio Maggiore. Harry’s Bar came into its own with the American influx after the war.

Discover 7 amazing tours that you can do starting from € 8, click here!