Let's shed light on this characteristic phenomenon. Among the various characteristics that make the city of Venice original all over the world, the phenomenon of high tide appears at the top of the list. This meteorological phenomenon is so much talked about that it has been pushed into legendary visions that go so far as to imagine a city completely invaded by water. It's not exactly like that... it's better to do a quick reconnaissance on the reality in a few points...

When and why does High Water happen?

High water surprises Venice especially during the winter season, from November to March. The phenomenon is due to a combination of three causes, the first two always present and the third of extraordinary character that increase its size. The flow of the tide: all over the world, thanks to the attraction of the moon and the centrifugal force of the earth's rotation, the water level rises and falls continuously. For about 6 hours it rises and for about 6 hours it falls;

The particular geographical location: Venice, like Mont Saint Michel in France (another famous place famous for the tides), is located in a geographical position that makes the tide phenomenon more conspicuous;
Extraordinary weather events: in the case of Venice the possible presence of the Scirocco wind blowing from the South-East pushes the sea inside the Lagoon increasing the effects of the tide.

Of course, in case of severe weather conditions in the Veneto region with flooding rivers that bring further masses of water to the Gulf of Venice, the phenomenon of Acqua Alta can reach extraordinary heights and very harmful to the city, as happened in November 1966 when Acqua Alta invaded all the ground floors of Venice.

How long does Acqua Alta last?

Acqua Alta does not last long, let's say a little more than 3 hours, coinciding with the ascent to the highest point of the tide and then its descent. After that the only remaining trace of its passage is the wet pavement of the streets.

How to know about the arrival of Acqua Alta?

The inhabitants of Venice have "always" lived with this phenomenon and, obviously, the city is very organized to know when it arrives. The Centro Maree di Venezia displays the forecasts every day on its website (click here); residents, in the vicinity of the arrival of Acqua Alta, receive an SMS alert on their smartphone and in various points of the city a few hours before the alarm sirens are activated.

How do you deal with High Water? 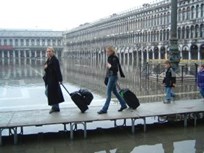 It is better to put this point in order, which is the subject of many mistaken considerations. The high water level is expressed in centimeters and refers to its height from the "average sea level". It is better to give an example: If a tide of 120 cm High Water is announced, don't expect to have 120 cm of water from your feet! The correct figure means that the sea will rise 120 cm above its average level.

But does High Water invade the whole city?

Even on this point it is necessary to clarify to eliminate some legendary visions...

The city of Venice, although completely flat, has some areas lower than others and therefore more exposed to the Acqua Alta. Surely the lowest area is also the most famous and that is St. Mark's Square which is often flooded even in case of low tides.

Going back to the numbers here is a quick reference scale:

* On November 4, 1966 the disastrous level of +194 cm was reached which caused terrible damage to the city.