Forgot your Password?
San Rocco and the Bridge of the Constitution
venice contents
History & Traditions Self Guided Tours
San Rocco 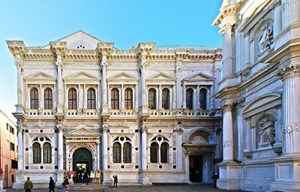 From the 14th century, the plague was a frequent occurrence in Venice as in many other parts of Europe, and on three occasions over the following two centuries it decimated the city’s population. Since neither the cause nor the cure were known, Venetians believed God was punishing them and so they would turn to faith and construct Schools and Churches in honour of a particular saint, usually san Rocco, the protector against plagues. This here is the

Scuola Grande di San Rocco, built during the first bout of plague in the Middle Ages. Like all other schools in Venice, this Scuola was funded by a group of wealthy benefactors, whose goal was to help the poor and the sick during times of epidemic crisis.

Of course, as well as engaging in philanthropy, the Scuole in Venice competed with one another for grandeur and splendour, and invested a grea deal on the decorations. The Scuola di San Rocco is famous for Tintoretto’s paintings that adorn the walls and ceiling inside. Opposite the Scuola’s splendid Renaissance façade is the Church of San Rocco, built soon after the Grande Scuola was established.

The Bridge of the Constitution 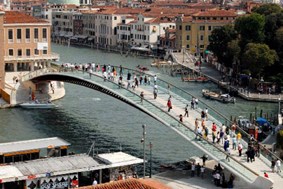 Entering the Grand Canal we see the Bridge of the Constitution, commonly known as the Calatrava Bridge, after the Spanish architect who built it. Even before it was finished in 2008, Venetians had strong opinions on this bridge that connects the train station to the bus station; some complaining that it is at odds with the surrounding venetian architecture, others finding its utility rather dubious. Leaving aside subjective judgments on its beauty, its function is rather apparent, given the high number of people who cross it daily. The steps and scaffolding are built in sections of shatterproof glass and Istrian stone, and the handrail is illuminated at night, augmenting the theatrical aspect of the whole structure.