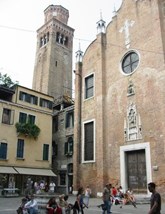 Entering Campo sant’Aponal, at the centre we see a tpyical Venetian well in Istrian stone. The church of Sant’Aponal dates back to the 11th century, although the austere-looking façade a typical example of byzantine gothic architecture of the 15th century, when the whole structure was almost entirely rebuilt.

From 1810 to 1851 the church was deconsacrated and in that time it was used for all sorts of purposes: mill, house of the poor, carpentry shop, storage place, jail for political dissidents, carbon bootlegging, second-hand dealership meetings and more. The bell-tower rising above the church is one of the oldest and most richly decorated in Venice. 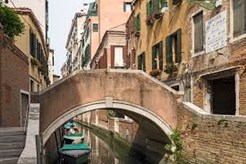 Il Ponte delle Tette, the Bridge of Breasts. It might not be so hard to guess the origin of its name, but the story is rather interesting. This area is called Carampane, from a wealthy man called Rampani who owned much of the property here and turned it into Venice’s red light district. These brothels on either side of the bridge were called Houses of Tolerance, and from the windows women would flash their breasts to passing men luring them in. Although prostitution was illegal, it was the Venetian state that effectively ordered them to do so, in an attempt to contrast sodomy and homosexuality which was rampant in the city, or to use the official, unhappy, phrase to extinguish “any sin against nature”.

The technique seemed to work and this area was so popular, that the word carampana itself became synonymous with prostitute or shabby woman.