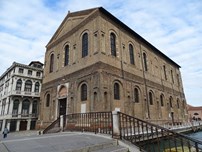 Scuola Grande in Venice was initially a place where the poor, sick and destitute could receive help and assistance. In time, the wealthy citizens who provided funding for the Scuola formed a sort of brotherhood, and soon it became a centre of artistic, social and cultural initiatives and meetings, a backbone of the Venetian Republic. One of seven Scuole Grandi in Venice, the Scuola della Misericordia towers over all other neighbouring buildings. Its numbers grew so quickly they had to continuously expand to accommodate every newcomer. The spaces inside are truly vast, especially by Venetian standards, and are regularly used for many art and culture exhibitions such as the Biennale.

This is Campo dei Gesuiti, of the Jesuits. The story of this campo began around a thousand years ago, when the Crusades were being launched in the middle-east. Many of the crusaders who came back, did so with all sorts of battle wounds and injuries, and so an association of monks was formed, called the Crociferi, whose job it was to take care of the veterans who’d made it back.

The big building to the right and those opposite the church were all property of the Crociferi, whose intentions were originally very honourable; but once the crusades were over, they had more time and more money which they began to spend in less honourable ways. And so in the late 17th century, with the help of the Pope in Rome the Jesuits essentially took hold of the property, and among various changes, restructured the lavish façade of the church to show off their own wealth. You’ll notice the twelve disciples looking up to the Holy Mary.

Aside from religious entities, this campo was home to many guilds and corporations, famously the Scuola dei Sartori, of the tailors and if you look for house number 4881 you’ll see two low-reliefs depicting a pair of scissors to mark their workplace. 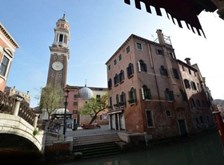 Here we are in Campo Santi Apostoli, with the Church of the Saint Apostles in the middle.

Looking towards the small canal, you’ll see a beautiful gothic house above the bridge. This was home to the Doge Marino Falier, an infamous figure in Venetian history. He once held a ball here, and among the participants was a young man who, rather drunk, began to importune one of the house-maids and so was asked to leave; which he did, but not before leaving a note implicitly calling Falier’s wife a harlot. The young man, who would later become Doge himself, was fined, whipped and sent to prison; Falier complained to the Judiciary Council that the punishment was not adequate enough but no avail, and so, beyond himself, plotted to seize complete control of the State. His scheme was uncovered and he was immediately decapitated in public. It’s important to note that the Doge’s figure was symbolic more than anything, as Venice was first and foremost a city where individual pride had no place, tyrannyical aspirations were unfeasible, and power was synonymous with the city, not a person.