The Bucintoro: the golden ship


On the origin of the name many pages have been spent, we report here that of Prof. Siega, "Dictionary of the 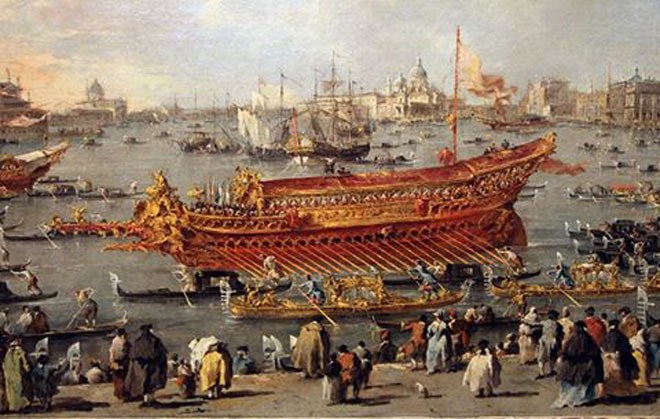 Veneto lexicon etymologically and curiously commented" Finegil editorial, which seems to us the most accredited; the name would derive from Buzon, Bonzonus which stood for navis; Buzon d'oro or golden ship from here became the Bucintoro. 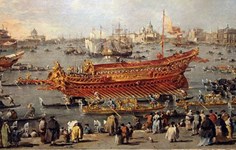 The Bucintoro was the Galea Ducale, a golden ship on which the Doge, as a symbol of the dominion of Venice, married the sea during the feast of the Sensa (Ascension).

We know very little about the Bucintoro, a very ancient tradition says it dates back to the times of

It came out in the basin on May 12, 1722, red in colour and without gilding (it was subsequently gilded by G. Adami) stripped of its ornaments, sacked and half destroyed by the French in '97, it was first reduced to coastal battery with the name of Prama Idra and then to prison for life: the golden parts, accumulated in bulk on the island of San Giorgio, were set on fire, almost in disfigurement of the now fallen Republic, amid the astonishment and general fear of the people who saw clouds of black smoke rising on the morning of January 9, 1798.

Today only a faithful model remains, built in 1824, at the Naval Museum. On 22 October 2004, with the establishment of the Bucintoro Foundation, a project was launched for the reconstruction of the last Bucintoro in the Arsenal of Venice.

In 2007, in one of the first sections just built, and exposed to the public among the columns of St. Mark's Square, the director Gianni De Luigi decried the verses of the XXII canto dell'inferno, in honor of Dante's coming to Venice, and the popular music singer Michela Brugnera with her musicians, entertained the public with Venetian folk songs in honor of the city.

Discover the real soul of the city with € 22, click here!